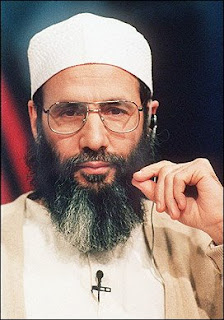 Driving into Toronto I found myself behind a van with a seriously ethnic look to it. Green in colour, and covered in bumperstickers lauding all things Irish, from Notre Dame and the blarney stone to a variety of Celtic crosses and other related doodads: harps, shamrocks, Guinness logos, erin go braghs and such like. (We were on the Don Valley Parkway, moving at the speed of government reform, so there was plenty of time to take all this in.) I was admiring the consistency of the vision when the van pulled off to the side of the road so the driver could take a phone call. (So safety conscious! My Irish driving stereotype was shattered.) As I passed slowly, I took in his collar, long dark beard, and hat. Very ethnic -- but not Irish. I laughed so hard I nearly spilt my coffee. Talk about prejudging. I'd been expecting some kind of leprechaun or faerie mayden, and here was a guy looking almost exactly like that picture of Yusuf Islam, Cat Stevens as he was.
My window was open, and so was his. Did I hear the strains of Enya or Danny Boy wafting into the morning rush hour, further evidence of this guy's love affair with the Emerald Isle? No. It was a (to my stereotyping ears) generic piece of Arabic music -- an oboe type instrument working in a musical scale or mode I didn't recognize.
So I wondered how he came to be driving that van? Did he just buy it off of his good friend Paddy O'Flaherty or Biddy Connolly? (Still with the stereotypes. Except that real Irish folks would be more likely to have a rude bumpersticker and listen to Biggie Smalls.) Perhaps the van was borrowed, and my man changed all the radio settings. Poor Paddy will be so upset.
Just before I got off at my exit, a beat-up muscle car pulled past me and cut in. There was just enough room for it after I braked. The driver flipped me the pre-emptive bird before I had a chance to honk. Then she gunned the engine and took off.
Probably a Canadian. 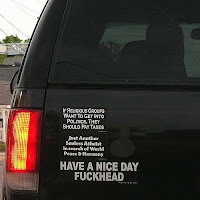 Posted by Richard Scrimger at 11:34