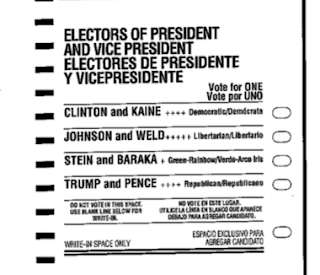 New York Times gave Clinton an 85% chance of winning.  Which meant Trump was a 7-1 shot. Do horses win at 7-1? Only all the time. Would you get on a plane with a 85% chance of landing safely?

Post-election analysis points to feelings of disenfranchisement, alienation, being ignored or snubbed by political power elites. An op-ed piece in my paper today says the election was all about race. My daughter (and her gal pals) say it came down to sex - people simply couldn't pull the lever for a woman.

I think everyone is right. Because they are all talking about their own experiences, their strongest feelings of fear and anger. And the election was about fear and anger.  Trump tapped into basic feelings.  Not good ones - base ones, in fact.  But they are strong.

Interesting that 2008 was also about a basic feeling - hope.

Poll error - I wonder how much lying went on?  People not admitting to Trump support in case they got laughed at.  Cooler to say you didn't approve of either candidate.  Reminds me of those college lifestyle surveys, where, apparently, the average undergrad has monkey sex 7-10 times a week with multiple partners and vast quantities of drugs.  Yeah, sure.

Fear of being laughed at is a real thing. And that fear - and the resulting anger - my well impact American foreign policy.  How will Trump react to world leaders who can not disguise their superior smiles, their deprecation?


The next few years could well be laughable, tragic, terrifying, incredible, or a combination of all of these.  They probably won't be boring.

Posted by Richard Scrimger at 10:27 No comments: