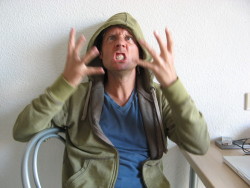 A random post occasioned by irrationality.
My irrationality.
Whenever I react more strongly than the situation warrants – when my emotional landscape is, as it were, suddenly out of drawing – too much anger, sorrow, fear, shame, whatever -- I pause and try to work out why. Usually it turns out to be something from my past, something I am reminded of.  I want to yell at the woman dithering in line ahead of me at the supermarket because I am mad at my little brother for displacing me in my mom’s affections.  See?  (This is a for instance, by the way.  I love my brother. And the blethering change-purse fumbler ahead of me deserves a swift and terrible fate.  There are people in a hurry, dammit!)
Ahem.
Speaking of anger, I was at the YMCA this afternoon. I love watching sports during a workout – no sound to distract me from the stair climber and a simple age-old story: winner, loser.  I’m keenly aware that I’m doing my physical best while younger more talented performers on the pitch or field or ice or diamond are doing the same.
My Y has a pleasant urban ambience.  Here a young dad urging his kids gently along the track.  There a superfit striver on her 450th sit up. (Whoa!  Could you slice deli meat on those abs?)  A susurration of commentary all around.

(I would have used an actual photo here but everything I found was too distracting.)

And then –  a half hour later during a commercial break, sweat dripping into my eyes --  I become aware of one particular conversation.  It's been going on all along, without break or variety. I shoot a quick look over my shoulder.  Am I overhearing a training session?  Nope.  It’s 2 old guys resting comfortably on adjacent machines, arms folded, legs crossed, chins wagging, shooting the breeze.  Not a drop of sweat on either of them.
They’re not in my way.  They’re not in anyone’s way.  And yet for some reason they begin to bug me.
Is it a justice issue?  This isn’t what the Y is for.  Nope.
Is it envy? Gee I wish I had someone to talk to.  Nope.
Is it disgust at flabbos who won’t even try to get on shape?  Nowhere near.
Is it the language?  Closer.  That’s part of it.
Language and attitude?
Bingo!
There it is. Nothing to do with the Y at all.  Listening to these 2 guys sneering at everything takes me right back to university, when I’d walk past coffee shops full of idle men passing judgment – usually of a crude and sexual nature -- on every female who walked by.  Didn’t matter if it was afternoon, evening, or late at night, they’d be there, staring, with their espressos and smokes and sneers.  Obviously there wasn’t much going on in downtown Toronto in 1980.
I had no idea what they were saying but my Portuguese girlfriend would get angry at being called a whore – loudly -- because she didn’t wear a kerchief and her skirt was short. 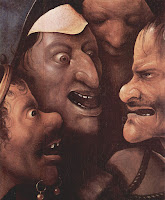 This memory is from decades ago, but it comes back crystal clear, thanks to the guys behind me.  An aural madeleine.  I can practically smell the little cigars the geezers all used to smoke.  I don’t think these 2 guys are saying anything dubious.  There’s a lot of Portuguese spoken at the Y and they’d be in trouble for sexual harassment of any kind.  Maybe they're sneering at Trump or Ronaldo – hey, maybe they're sharing feelings – but the dismissive tone and stance is spot on.  The attitude is exactly the same:  relaxed, superior, aggressive.
It’s the reason for my anger.  And now that I see it, I’m not angry any more.  Those rude old misogynists from  my university days must be dead anyway. And serve them right, the bastards! (Hmm.  Little anger remains, I guess.)
Gentrification causes problems of displacement.  We know about the displaced poor.  Has anyone given thought to the displaced geezers?  Those monoglot coffee clubs of my youth are gone.  Where do you go to kvetch now?  There’s lots to criticize about today’s kids – they’re so fit, so happy, so damn tolerant.  Got to hate them.
I guess you go to the Y.

Posted by Richard Scrimger at 18:43 No comments: