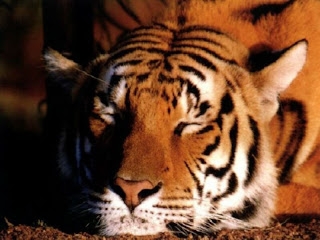 Back from Europe now, full of wine and cheese and memories. My in-basket was full too, and I have been busy separating sheep from goats, email-wise. So far, lots of goats. Who was it whose conversation was as two grains of wheat buried in a bushel of chaff? I know how his wife must have felt. (Is spam seasonal? For a while there I was getting lots of chances to improve my sexual performance -- Ladies Want You To Be A Tiger In The Bedroom! though presumably not like the one pictured. Now I seem to have won the lottery every time I turn around. Sex and money, yin and yang.)
One last comment about Europe, and then I will get back to my present life. Here's my favorite line in the guidebook: Nimes, a flourishing town under Roman occupation, underwent a long period of decline before rebounding under its current mayor to become a thriving centre for tourism and the arts. Long period is right. The Romans were there in AD 200.
I just love the idea of an eighteen hundred year decline. The good citizens of Nimes were in no hurry to turn their economic ship around. The place drifted through the dark ages, middle ages, renaissance, reformation, industrial revolution ... and the town council kept saying, You know, we really should do something about this decline of ours. The Age of Enlightenment is passing us by. What we need is some new ideas! And then they'd break for lunch and a nap, and let the town go a little bit more to seed. It's like a kid who gets an A+ in music in grade one, has huge plans, and finally gets her act together and puts out a cd on her 80th birthday.
Anyway, Nimes is a charming place now, with a well-maintained coliseum in the middle of town, where you can experience bullfighting one day and Leonard Cohen the next. Ole and Allelulia, blood and transfiguration -- another example of yin and yang.
Posted by Richard Scrimger at 08:23 3 comments: 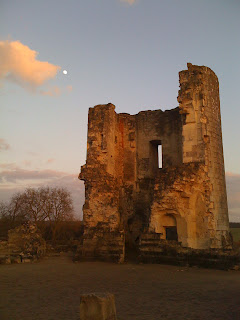 Bye, Geneva, hello south of France. The thing about Europe is that it is -- follow me closely here -- old. Meaning that people have been building there for a long time. And some of those buildings are still around. When you come to my place I will send directions like: get off the 401 highway at Cobourg, come down the main drag and turn right at King Street. Driving to my friend Isabel's in the south part of France, I read directions like: turn left at the 12th century church, (seriously, like the one here) ... go around the monastery wall and over the bridge by the mill. I felt like I was in a Walter Scott novel, waiting for the Black Knight.

I was not driving, by the way. All the cars in France are infected with clutches, and I gave up after I stalled three times getting out of the parking spot at the rental agency. Thank heavens Mir likes to drive standard, or we'd still be there.

So I got to read the directions and enjoy the elderly scenery -- the renaissance castles and Roman corn chandleries and medieval insurance offices and so on. I pointed them out to Mir, who was trying to dodge the French. Their roads are built chariot-wide, but the people in their cars and trucks take them as fast as we do ours, and there is a fair amount of deking and diving and swearing and fist-shaking. Mir interrupted my historical commentary at regular intervals to tell me to glare at a particular car as we passed on a roundabout. Call the driver something awful, she would say, and I would roll down my window and yell, Son of a bridge! and Species of pastry shop! and other French epithets.

Isabel and her husband Bob live in a quiet dream of beauty, with their own olive grove, and the 12th century church and millstream visible from their sun-warmed terrace. A bottle of the local wine was on the table when we arrived -- another thing the Europeans (French especially) have been doing for a long time.
Posted by Richard Scrimger at 18:41 4 comments:

the kids are all right

A street scene to restore my faith in the Swiss as a nation. Walking past a school in the Paquis (a slightly scruffy part of Geneva -- which means the sidewalks are very clean but not actually polished) at 15:45 or so local time I was pleased to hear children giggling. Rounding the corner I came upon a knot of them -- boys and girls maybe ten years old, wearing uniforms which had been artfully untucked and unbuttoned, in the manner of schoolkids the world over. They were spelling a word aloud to each other, boys and then girls, letter by letter, gasping and snickering after each letter. They finished the word as I reached them, and burst into an explosion of giggles.

The word was -- well, you can guess the kind of word it was. In every country (except Ireland for some reason -- I nearly choked on my beer once, hearing a proper looking woman bellow it out) , a word teachers would disapprove of.

The kids shut up when they saw me, but as soon as I was past them the giggles returned, louder than ever, and they began another word. The ghosts of Calvin and Zwingli were turning in their graves, but I smiled all the way back to the hotel.
Posted by Richard Scrimger at 22:52 6 comments: 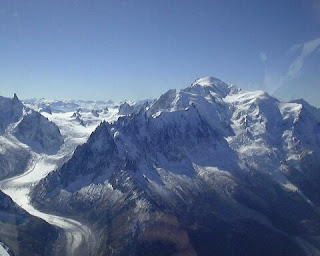 So here we are in beautiful downtown Geneva, where the keyboard looks a bit different and my typing speed suffers (and it was in a fair amount of pain to begin with). I have seen the Mont Blanc. I have eaten fondue. I have wandered the streets of the old town, where John Calvin himself frowned and shook his head at things back in the 16th century. And I have hung out with a bunch of thoughtful and interested anglos (American, British, Australian and yes Canadian) who live in or near here. And I have yet to find anyone who can tell me much about the Swiss national character. What are the stereotypes? Chocolate, cuckoo clocks, banking, neutrality, Heidi. My daughter told me to bring her back a watch or an army knife. Add these up and it all sounds kind of charming.
Then I heard about the Swiss noise rules. If you live in an apartment block you can't flush a toilet late at night. Forbidden. Too noisy. And by late at night I am talking 10: 30. You can't even pee standing up. An American who has lived in the same building for ten years got her mail service interrupted when her name plate fell off her mailbox. A week went by and she asked her letter carrier what was going on. His reply: Your name is not on your mailbox.
But you know me! she said. You see me all the time.
He shrugged. But your name is not on the box.
So I get a sense of an uptight rule-ridden people.
Then I spoke to another ex-pat who informed me that that noise rule is all hokum -- something they like to fool tourists with. Apparently Switzerland has relaxed laws on euthanasia and drug use, and some sections of Zurich are very reminiscent of Amsterdam. And just today I was told by a native that the Mont Blanc I have been admiring is not the right mountain. Mont Blanc has been behind cloud all week. We tell Americans that that one is Mont Blanc so they can go home happy, she said, pointing at something that did not look like the picture here.
So now I am trying to reconcile the gemutlich Swiss stereotype with the repressive one, and adding a streak of mischievious deception. This tourist will go home confused.
Posted by Richard Scrimger at 22:00 4 comments: 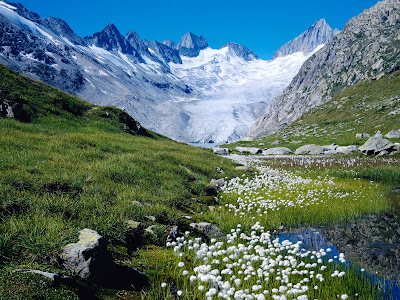 Real fast now, because the taxi is waiting. I am finished the zombie book. Wa-hoo. And I like it!

And am now off to teach in Switzerland. Yup, I am sure my hotel will have a view just like the picture here. I foresee fun and fondue in my future. I don't know if there will be any other causes for alliteration.

I'll try to post a couple times, pointing out random curiosities of the world's neatest neutrals.

Geneva, here we come.
Posted by Richard Scrimger at 14:58 3 comments: