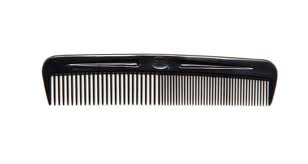 Talking about common grooming tools today.  Yesterday my son biked across town to a family event and arrived totally soaked.  He dried off, checked himself in the hall mirror, and said, Hmm.  His hair was messy.  By coincidence (I was going to say strange coincidences but they are all strange, aren't they.  No one talks about a totally natural coincidence) I had just noticed that the back pocket of my dress pants contained a comb (exactly like the one in the picture up there).  I don't usually carry a comb - or wear dress pants, for that matter - but this was a fancy affair.  Anyway, without thinking I handed my son the article in question in order to help him fix his hair and he responded thus:

You know, Dad, I don't think I have ever used one of these.

Now, I am no follicular fashionisto.  I shave irregularly and badly, and get a haircut every few months.  My daily grooming ritual involves running my fingers through my hair and going downstairs for coffee. My father (Weekly Haircut Dan, they call him) makes pointed comments about rats' nests which I hardly even hear after all these years.  And my son, in his own way, is a very styling guy.  He frequents a super cool barber shop in Kensington Market (I would give it a shout out but they might not appreciate a plug from me, and besides I cannot remember the name).  His current look, modelled after the Lucky Luke character in the 70s French comics, is a very trendy one indeed.

But his words gave me pause.  Never to have used a comb. Such a common piece of male paraphernalia, responsible for so many iconic images:  the comb over, the pompadour combthrough,  the straight parting.  Could the guy in this picture look this way without a comb?  I do not think so.

Really?  I said to my son. Not even as a kid?  Didn't I comb your hair once or twice when you were going to some do or other?

And even as he was shaking his head I was shaking mine too.  That picture - Dad bent over, running his pocket comb through sonny boy's cowlick -  is from my childhood, not my son's.

Interesting, was all I said.

We stared into the mirror together.  He fixed his hair with his fingers. I put the comb back in my pocket til next time. If there ever is one.

Posted by Richard Scrimger at 09:36 No comments: