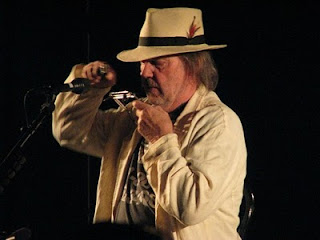 New music time.  Ed has brought home a harmonica (or harp as we both make a point of calling it.  I have no idea who are impressing).  I like the idea of the harmonica.  It is soulful and portable.  The sound conjures up images of loneliness in a sad but not awful way.  Riding the rods, late nights in the hoosegow. Simpler times.

Hey, sidebar.  How come the old slang terms for jail -- hoosegow, calaboose, stoney lonesome, cooler -- seem so much nicer than the modern ones?  Was it a happier place, or were people in general kinder?

My own ability on the harmonica is limited.  I can sound like a train -- whuffa chugga whuffa chugga or something (you know, it is difficult to convey musical quality through text) -- and that's all.  Ed got farther than I ever did after only an hour on the internet, and he has spent the last few days getting better and better.  Now he can sound like Neil Young for most of one song.  Not bad, except that I have had to listen to that song more often than I really want to.  (It was on my iPod -- it isn't any more.  As I said, I like the idea of the harmonica.)

That's another connection between harps and trains:  in the distance, at night, softened by nostalgia and a glass of wine, they produce warm feelings.  Ed leaning in the doorway with his hands up to his mouth and his eyes half shut and his heart of gold ... makes me smile.  Maybe it's the wine.
Posted by Richard Scrimger at 11:44 1 comment: 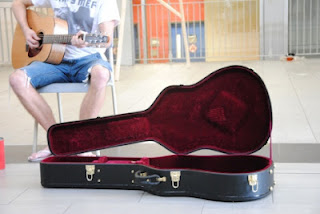 All right, it's official, my boy makes more money than I do. It's a stage in growing up for both of us. Walter Gretzky went through it too, and Kirk Douglas, and Scott Young. My grampa went through it back in the 50s when my uncle left the family corner store and started doing well in the schmatta trade. Last Saturday my son Ed (with his snare, tambourine, ukelele and friend Frederico) went busking. They stood in front of our local liquor store for four hours and made over 100.00 each. When I went to hear them they were midway through a reggae version of "Uptown Girl." (You have to give them what they want, Frederico told me later. People like upbeat melodies, easy rhythms.) His light pure tenor floated over the crowd like whipped cream on a cafe Viennoise, Ed contributed masterful brush stylings and chorus harmonies, and their guitar case was overflowing with silver and paper.

I was impressed as hell. And at the same time aware of a certain sadness. Time's winged chariot and all. Seems like only last year Ed was asking me for allowance, and here he is in the financial big time. I told him this and he laughed and said I was a real kidder.
I assured him that I meant it.
You don't get the economics of children's writing,I said. You guys did way better than I did today.
This prompted a moment of seriousness. I could see Ed evaluating, pondering, coming to a conclusion.
You should change jobs, Dad, he said.Maybe.
Or maybe I should give people what they want.

Hey, I remembered, and I think there's space. Here's my homework from a few weeks ago: the piece where I attempted to write like a Jarman story I didn't understand. Ready? Ahem ...

He had knuckles like Brazil nuts and chipped pink nails, and he held the knife with nervous familiarity, like an elementary school friend’s hand during a museum visit. (Buddy up, class.) Our end of the bar went silent except for Gladys singing, and he lunged across the counter, catching me in the throat before I could move. When I did jump back the knife came out and the blood after it, a thin urgent stream, pulsing like a sprinkler, splashing, spilling on the coasters and in the beer and on the polished wood. I turned to Denny and said Do you believe this guy? Except that no words came out and I tried again, I don’t even know his wife. Not bad for off the cuff but there was still no sound. Old Denny’s Eskimo pie eating face told me how bad it was, how bad I was, cause I didn’t feel a thing. I staggered away with my hand to my throat and the liquid trickling out from under my fingers, listening to Gladys on her midnight train to Georgia. Thinking, Me too. Thinking, After all those open mikes I’m really dying here. Thinking, how many changes can I ring on the one joke?

Talk about escalation, the tapster had tapped us and we’d tipped him and then I’d topped his joke about how large it was with a comment about his wife telling me something different heh heh and thirty seconds later I’m stumbling and splashing and people are getting out of the way and the room spins. Pain is a transforming force, a portal to the future, and I see myself in my black suit and t shirt in a dingy cavern grabbing the mike off the stand and saying, Hello Hades it’s great to be here; I just dropped in for the eternity and I’m thinking long-range investing. But the words won’t come out and I start to sweat and now I can see a face whirl away from me and boomerang. Is it the bartender or one of the Pips? His eyes are holes and his mouth is coral-lipped and wide open. Whoo whoo whoo.

Fourteen year old Robin was the first lipstick wearer in our class. She would look over her shoulder at me and lower her eyelashes before climbing onto the school bus. I fell so far in love I thought I would never climb out. I walked home incapable of speech. I dreamed about her shadowed eyes and calves and pointy chin, her hand raised in Geography, the flash of brassiere I sometimes saw between the buttons of her blouses. When she approached my bank of lockers the day before the Halloween dance, and slipped her hand into Denny’s (he had the locker next to mine) I thought I might as well die. They walked away, no backwards look, and I could feel joy gurgling from me like bathwater, leaving a ring of dirt and cold. My locker was open and I turned to the picture of Sly Stone I’d taped to the inside of the door and said Do you believe that girl?

Posted by Richard Scrimger at 07:45 3 comments: