good luck in an earthquake 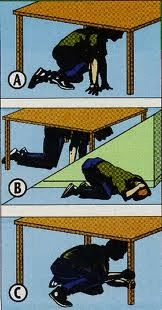 Most cities have cliches associated with them.  Toronto has a big ego and a big chip on its shoulder, a bunch of bad sports teams and a hilariously awful mayor.  Vancouver, where I am hanging my hat this week, has a few things that Toronto lacks -- mountains, ocean, mild temperatures (I have never heard so much griping over +5 in late November.  Get over it, people!) rain mixed with more rain, and earthquakes.

Yup, earthquakes.  The sign beside the elevator call button in my hotel is a graphic representation of what to do in the event of an earthquake.  There it is over there.


I am old enough to remember the STOP, DROP, AND ROLL drills -- government plans designed to help us Scarborough Ontario elementary schoolers survive an atomic blast.   Would stopping, dropping and rolling have saved us?  We never had a nuclear explosion to deal with so I don't know for sure.  Maybe we would have stopped dropped and rolled ourselves to safety while the fireball somehow passed us by and vaporized everyone else.   Maybe not.

I want to know what to do in the event of an earthquake so I studied the sign carefully.  Seems that my instinct -- to run around screaming -- is wrong.  In an earthquake -- at least as far as I can judge from the graphic  -- you are supposed to find yourself a table and cling to one of its legs.   Does this sound silly?  Well, yes.  Maybe not as silly as stopping and dropping and rolling to avoid an atomic blast, but pretty silly.

The only table in my suite is a teeny thing I put my book and wine glass on.  I could practically wear it like a hat.  If I feel a rumble from the fault line while I am working or reading, will I lie on the floor and pull this table over me?  Probably not.  I may find myself stopping, dropping and rolling out of instinct.  But I am more likely to run around screaming.  Maybe I will take my wine glass with me.

Posted by Richard Scrimger at 15:12 No comments: