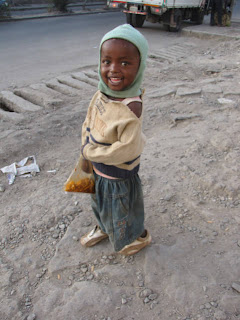 Been back for a week now, managed to throw Christmas together without putting a lot of worry into it. Africa puts things into perspective. One of my favorite things about Addis was the way no one seems to be complaining. The place must have its share of whiners, but I didn't meet any. You'd think that leading your leprous grandma around to beg for change was a totally normal thing to do. It was a blazing hot day and our van taxi was stopped to pick up passengers (love the system -- taxi pulls into the stop with a kid yelling the destination out the side window. At the stop are 4 other van taxis going to different places, with 4 other kids yelling their destinations. You can travel all over town for about a quarter.) The little girl in question was calm, neatly dressed, patient. She met my eye, smiled, nodded gravely, and moved on to the next taxi, pulling the old lady after her by her rotting stump.

In the same way, people would tell me about walking 50 or 100 kms to Addis from their village as if it was a normal way to get around. And why did you leave your village? I would ask. My parents died, they would say. That's terrible, I would say, and they would shrug. It happened, and I had to find a place to live. How old were you? I would ask. Twelve, they would say. Or thirteen or fifteen. That's terrible, I would say again, and they would shrug some more and drink their (lovely but oh so strong) coffee. I must have heard that story four or five times, from tough street kids, from twenty year old students, from the sixty-something director of my NGO. And not one trace of sentiment or self-pity, though my director did admit that they were hard years.

Lunch time my first day home Ed said, Dad, would you make me a grilled cheese sandwich? And I had to smile. Sure, I said. Do you want me to cut off the crusts? I'm not knocking my kid, of course. He has to bear his life, as does the little begging girl and the orphans and everyone else. But like I said, I didn't worry quite as much as usual about who got what for Christmas this year.
Posted by Richard Scrimger at 13:45 4 comments: 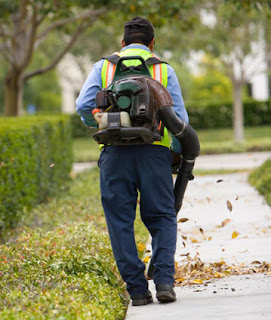 It's 1:00 Ethiopian time which means 7:00 am, and I am getting ready for breakfast and then my gig. I've been here a few days now and am starting to get the hang of it. For instance, service. You can't do it yourself. There's a chef station in the breakfast room, and a guy in white who whips up a great spiced omelet for you, but you can't carry it to the table. You make an I'll take it gesture, and he shakes his head. A pompous guy in a tux points to a demure waitress, who takes the plate from the chef, ducks her head at you and leads you to your table. She brings you coffee one pot full at a time. (Looks like a standard metal pot but does not spill -- that's impressive). She has to make the first pour, then ducks her head again and leaves and lets you finish.

If you want to take food or drink upstairs to your room -- well, forget it. I tried to carry my last cup out of the restaurant a couple days ago and was chased down the hall by an old guy with a tray shouting, Mister mister and looking really unhappy. I tried to explain my situation to him and he tried to explain his situation to me, and he won because he simply would not allow a guest to carry anything. We marched to my room, him in front with the tray and me behind looking sheepish. It wasn't about money -- I offered but he shook his head and marched away.

I don't really like being waited on but it's not my country and I'm not going to insist. Maybe this is a way to deal with unemployment. Everyone gets a little something to do. Like the ladies I saw sweeping the walk in the courtyard of the ministry where I am teaching. I was early yesterday (rare for me) and the sessions started late, so I was able to observe them for almost 45 minutes. There were three of them with brooms and dustpans. The first swept a small section of walkway, the second scraped the leavings into the dustpan and slid them carefully into the third lady's bucket. Then they switched jobs and moved on. I watched in fascination. The tiled walkway was maybe as long as two first downs and no wider than a residential sidewalk. Someone with a leaf blower would have finished in a minute or two. After 45 minutes these ladies were less than half way down the walk.

This is not me making fun of primitive ways of working. Not at all. A leaf blower is never a better answer. I did feel some initial frustration at observed inefficiency -- very similar to my feeling last year watching a large road crew take an entire week to dig up and then fill a hole in my street. (Their work to chat ratio was lower than the sweepers, and the project was completed at umpteen thousand times the cost and mess.) But the three women seemed to be enjoying themselves, and the work was so dogged and painstaking and plain weird to me that it wasn't long before I was hypnotized. Got me pondering on the importance of efficiency. Why do we care so much? What is there about the finishing that matters more than the doing? Maybe there is something to be said for driving slowly through life...

But now of course I am running late and have to hurry if I'm going to enjoy my omelet and coffee. I'd order room service but I am afraid of how many people would show up.
Posted by Richard Scrimger at 11:45 5 comments:

does anybody really know ... 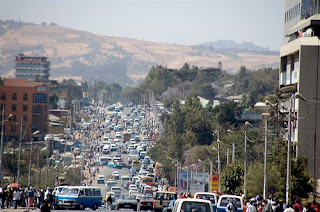 So, Addis Ababa. It's a real city, in that there are masses of people on the roads and sidewalks, walking and arguing, smiling and sitting around, driving with hands on the horn and heads out the window (love the drivers here -- no sense of lanes or right of way, plenty of smiles, and horns as conversation), selling food and I don't know what and shoes (lots of shoes, seeming like pretty good quality though I am no judge) and generally doing their best to get along and have some fun in the process. It helps that the sun is shining. It may help that it is Sunday and hardly anyone has to work. And it may be that I am missing something. I won't lie to you guys -- there's a whole lot here that I don't get.

Like the guys in the uniforms. They seem to pop up all over the place. I haven't seen a lot of consistency but there are brass buttons and caps and stripes galore. No guns, no agenda that I can work out, but they stay where they are, at ease mostly, and we regular walking-around guys leave them alone.

I say we but I kind of stand out. I am not a regular guy here. The gifts of a city are invisibility and unconcern, and they don't apply to me here. I get stared at. Not heckled or approached, but noticed. I did not see any other white folks on my walk. None. I don't think I was in a tough part of town. The streets were wide and there were all sorts of women and babies and old folks walking calmly. But no tourists except me.

I am gradually getting used to the time thing. After 24 hours on airplanes crossing who knows how many zones, I have no sense beyond day and night. My various electronic devices tell conflicting stories. Computer: 5:13 am. Cell phone: 11:14 am. Wrist watch: 1:15 pm. I set my watch to the clock in Tesfaye's car last night. It said 10:00 but I know that car clocks lie. (I still haven't switched mine to daylight savings.) When I asked him whether the time was correct he shrugged.