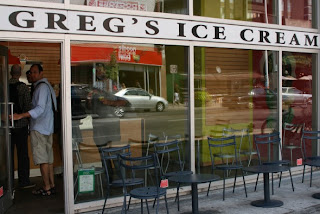 Funny and rather touching moment yesterday. Well, I think it's touching. Maybe it's just funny. Mir and I were walking along Bloor Street near University in Toronto, past the place where a guy named Greg used to sell home-made ice cream. (I remember the shop well from back when I lived in Toronto in the 90s. There were several brilliant cinnamon flavors, and one with Grape Nuts that I liked too.)
Greg's wasn't where it used to be, which was too bad. I had been kind of in the mood for an ice cream cone, and now that I couldn't get one I wanted it even more. I was wondering if Greg had gone out of business or perhaps moved, and if so where. And so I was standing in the middle of the sidewalk with a slightly lost expression on my face (actually, this is a pretty common look for me. You know how some people's faces settle naturally into a frown, or a smile? Well, mine settles naturally into a gormless puzzled expression -- an idiot who has lost his village) when up steamed the largest man I'd seen in a long time. Not tall -- shorter than I, in fact -- but wider than a church door, with a voice and features to match, so that he seemed even larger than he was. He pushed his bundle buggy right up to where we were standing, put his watermelon-sized head on one side, and positively bellowed at us.
WHAT'S WRONG? he asked.
Mir jumped back, a startled defensive smile on her face.
YOU LOOK LOST. DO YOU WANT SOME HELP?
I explained our situation. I have never thought of myslf as having a quiet voice, but it sure sounded hushed after this guy's.
GREG'S? WHY THAT'S EASY! he cried, his face shining with joy and sweat. HE'S MOVED DOWN THE STREET! CROSS SPADINA AND IT'S ON THE OTHER SIDE OF BLOOR. CAN'T MISS IT!
His sense of personal space was different from mine. A close talker. His bundle buggy bumped against my leg. I could see every pit and crease in his face, count the missing teeth (three) in his smile.
I thanked him for his information.
NOT AT ALL, he boomed. WE CAN'T HAVE FOLKS MISSING THEIR ICE CREAM. OFF YOU GO NOW!
He steamed away. We called our thanks after him. He waved his hand without turning around. We watched him disappear into the Saturday sidewalk crowd.
I like to think he was on the lookout for new strangers to help. Someone needing a place to stay, perhaps, or a bathroom, or directions to the Museum of Ceramic Art. Viewed this way he becomes a kind of civic hero. Wherever doubt lives, and indecision, whenever people need to know where to go but are too shy to ask, THIS GUY will show up with his booming voice and his answers.
All right, maybe it was just one odd moment in the day. But we did get our ice cream, which we wouldn't have without THIS GUY.
Posted by Richard Scrimger at 11:20

I think that's really sweet! You were right first time. Touching and funny.

Glad you think so too. He's just one more citizen out there making the city a better place.

I like the old Greg's place better. No fair.