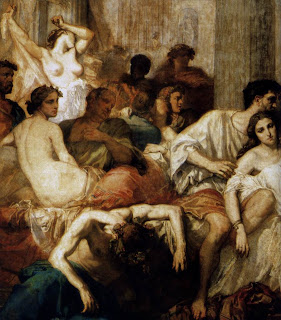 Two unrelated quickies today because I have no long thoughts, and because I just this moment had a real good thought (and about effing time) for the ending of the zombie book I have been writing off and on for a year now. After the football game the not-quite-zombie gets trapped in the remote laboratory with the actual zombie, and our intrepid hero and heroine decide to climb into the house and rescue him ... but enough about that. Plot synopses usually sound stupid. (Two kids fall in love but their families hate each other, and she's supposed to marry someone else, and he kills her cousin in a fight, and they decide to run away, and a crazy priest comes up with a magic potion that'll make everything right but he doesn't tell them how the potion works and they end up committing suicide. If I were Shakespeare and someone came up to me with that story idea I'd have said, Really? No, really? You're kidding, right?)

I was in the grocery store the other day and I overheard two guys talking an aisle over. They sounded like they were sixteen or so, laughing and telling each other to shut up. No you shut up. No you.
Then one of them got serious and said, What about those? The other one said, Yeah, I don't know what do with them. And the first guy said, They're all decadent, you know.
I had been listening with half an ear as I threw peanut butter and pasta sauce into my cart, but this last exchange got all my attention. To me, decadence looks something like the picture there. Anyway, I raced to the next aisle, and found two guys in uniform unloading a giant flat of President's Choice chocolate chip cookies.

You don't like that? I thought it was funny. My second quickie was a phone message waiting for me when I got back from Toronto. Not my agent wanting the overdue zombie book, or my kids wanting to borrow the car. This was a local stranger, acquaintance of an acquaintance, who wanted to become my -- get this -- financial adviser. I've got some interesting ideas about how you can grow your fortune, Rich, he said. If you are interested please take down this number and call me .... I stared at the phone for a second, and quietly deleted the message. It reminded me of the old joke about the definintion of an optimist: an accordionist with a pager. You could add: a kid's author with a financial planner.

That'll have to be enough for now. It's all I got.
Posted by Richard Scrimger at 06:46

Funny that the guy didn't know what to do with the cookies. Maybe there should be instructions on them.

Hmm. You mean like, a HOW TO EAT panel? In case they try to inject the cookies, or apply them topically. Maybe.