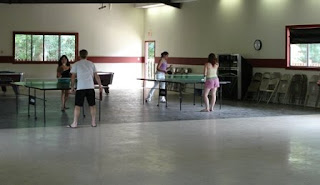 My grandfather said that his west end Toronto neighbourhood was getting mixed when a ... Portuguese family (that's the way he put it, with a pause before Portuguese) moved into the old Astor place. I don't know what Grandad would say about our neighbourhood. Mixed puts it mildly. We live in an area bounded by a mental health facility, four auto body shops and a slaughterhouse. There's public housing, decrepit wartime bungalows, shabby Victorians, super-expensive condos, and the best dessert place in the city only it's never open (topic for another day). And in our back laneway, until recently, a toxic dump.

That's right. I noticed the low plywood hoarding a few days after we moved in. On the other side was what looked like a swimming pool of stagnant green sludge. I asked a neighbor about it and he said, Oh, that's the toxic dump site. Real casual, like you'd say, Oh, that's the Rec Centre (see picture --a Connecticut Rec Centre. An ornament to any community, no?) I wanted to show that I was cool too, so I said something like, Oh, ah or Sure, sure. And I kept my eye on it. It didn't bubble or anything. It didn't smell too bad. After a while I stopped noticing it. It became part of the landscape, like the raccoons and orange condoms and graffiti (apparently DAN IS NOT THE MAN). The toxic dump site. It even had its uses, the hoarding being so noticeable. I'd give friends directions to our parking spot by saying, We're four houses up from the toxic dump site.

And then, yesterday, I heard a rhythmic thumping and giant sucking sound. When I went out to check (surely not Dan? I thought) I saw a stream of water flowing down the laneway from underneath the plywood hoarding. Two guys were pumping out the sludge. They told me that the city had removed three feet of topsoil a months ago, after they found traces of boron. And now they were finally getting around to filling in the hole. Boron? I said. What do you mean, boron? They shrugged.

As of this morning, the hoarding is down and the toxic dump is gone. Cars in need of body work are parked there on clean sand. I have been researching boron.

On the whole I am not sad to see the end of the toxic dump site. Sometimes a neighbourhood can be too mixed.
Posted by Richard Scrimger at 16:43

Sounds like X-Files.... that toxic dump. I wish that show was still on. Now I have to watch "Hoarders". It's the only thing that compares.

My son is oddly drawn to Hoarders too. It's certainly creepy. But on the whole sadder than X Files.