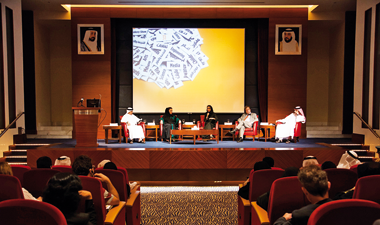 I didn't ever come back to the time at the Sharjah International Book Fair last December, where I sat on a panel very much like the one in the picture, with the Minister of this and the Professor of that and a moderator with a frown you could build a temple on.  Serious moderator.   Our discussion was titled: The Nectar Of Meaning, a topic so, um open (that is to say, meaningless, not to say stupid and hilarious), that I spent no time in preparation.  There were TV cameras and translators and an actual audience, and the other panelists pulled out sheafs (or sheaves, like bringing in the sheaves?) of notes, and I sat there, mesmerised by the moderator's lowered mono brow and note taking which was in Arabic (duh) and backward - that is, right to left (also duh. I don't get out much).  I actually stared down at the hand and thought, Cool.  I am such a doofus.

The other panelists spoke first. They used the phrase nectar of meaning a couple of times.  The prof got especially worked up about it.  Thing is, I had absolutely no idea what they were talking about.  I had a translation, all right, but the concepts were so abstract, the sentences so laboriously constructed and hard to decipher that nothing registered in my ear.  They might as well have been saying blah blah blah blah nectar of meaning blah blah.  Half an hour later the darkness was still total.  Then it was my turn.  The moderator wanted to know what I could add to my fellow-panelists' analyses.

I started my own talk with the phrase, And now for something completely different.  Then I told some stories and hoped for one of those scene missing slides.

The reason I remember this Sharjah moment now, months later, is that I went through a similar experience last week.

I was part of a quarter of writers at a genre-type literary event.  Now, I have no issues with genre writing -- I read a lot of detective stories and fantasy.  But for all my metaphysical speculation I don't write genre (unless you figure that all writing is one genre or another - which I kind of believe.  The tropes of fantasy - elves and swords, quests and curses and magic rings -- are not much different than the tropes of serious literary fiction --  exotic older love interests, mentally troubled siblings, sexual secrets).  Anyway.  I listened to these talented folks reading about magic and the coming of the Star Cats, about fae and their non-human heroines, and I applauded along with the rest of the audience.  And then it was my turn, and I opened my spiel with:  And now for something pretty darn different. 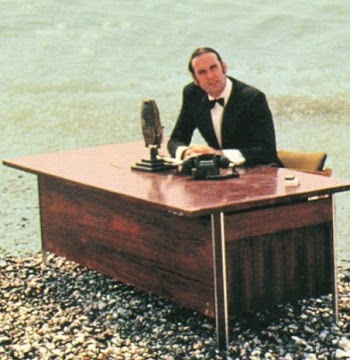 Posted by Richard Scrimger at 01:41