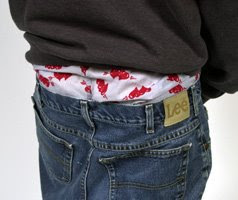 And so the Christmas season sinks slowly into the west behind us, and we are left with a lingering scent of pine and a bigger than normal VISA bill. Did you get any really dumb presents? One of my favorite moments was Thea opening her KK gift, which was a ball of yarn the size of a beer keg. What the hell? she said. I tried to be sympathetic while smiling widely. Thea does not knit. The gift made about as much sense as a bag of giraffe food, or a book of sonnets in Icelandic. She has gone back to Toronto, but the yarn is still here. I have used some of it to tie up cardboard boxes which, for some reason, we can not put out to be recycled until they have been flattened and stacked into packages.
Actually, What the hell? came up again during present opening. Sam wanted a belt for Christmas. I think it was on the top of his list. But somehow, amidst all the dashing around and spending, the belt idea got lost. As Sam opened present after present he'd say: I sure hope this is a belt. Of course it wasn't. And his face (like his pants) fell lower and lower. Ironically one of Ed's presents was a belt. Sam said: Isn't that for me? But Ed was already slipping it on. When there was nothing more under the tree, Sam thanked me for his gifts because he is a polite boy. And then his jeans slipped again.
Looks like you need something to hold up your pants, son, I said. How about some, uh, suspenders?
He frowned at me. What the hell, Dad? he said. I mean, what the hell?
I nodded sympathetically. Christmas presents, I said.
The whole thing reminded me of my friend Michael, years ago now, scouting for a place to live. The only thing his girlfriend had insisted on was that it not be a basement apartment. She didn't care where it was or how big it was or what kind of amenities it had -- just not a basement. Michael came to work a few days later with a scowl. He'd found the perfect place: large, cheap, brilliantly located. And it's so bright, he said. Deep cut windows, south view. I didn't even realize it was a basement at first. But Genevieve is upset. She doesn't want to take the place. Can you believe that?
I shook my head sympathetically. Women, I said.
Posted by Richard Scrimger at 09:00

Poor Sam. Get the boy a belt.

I got way too much chocolate. I do like chocolate but just sometimes, not every day.
I like dark roast coffee. I got medium for Christmas. My niece, who is in a dental hygiene program, gave me toothpaste and floss. Useful stuff. My other niece and nephew gave me a gift card from "Subway". Maybe they think I'm starving. Oh yes and then there's the dvd set of "The Partridge Family" from my sister. Actually, it's not too bad to watch. If you've had enough wine that is.

Maybe Sam could use the yarn to hold his pants up? Or you could macrame something.